Meandering Through the History of Tanzania’s Serengeti

In Boyd Norton’s ‘Serengeti: The Eternal Beginning,’ he famously said:

“Wilderness gave us knowledge. Wilderness made us human. We came from here. Perhaps that is why so many of us feel a strong bond to this land called Serengeti; it is the land of our youth.” 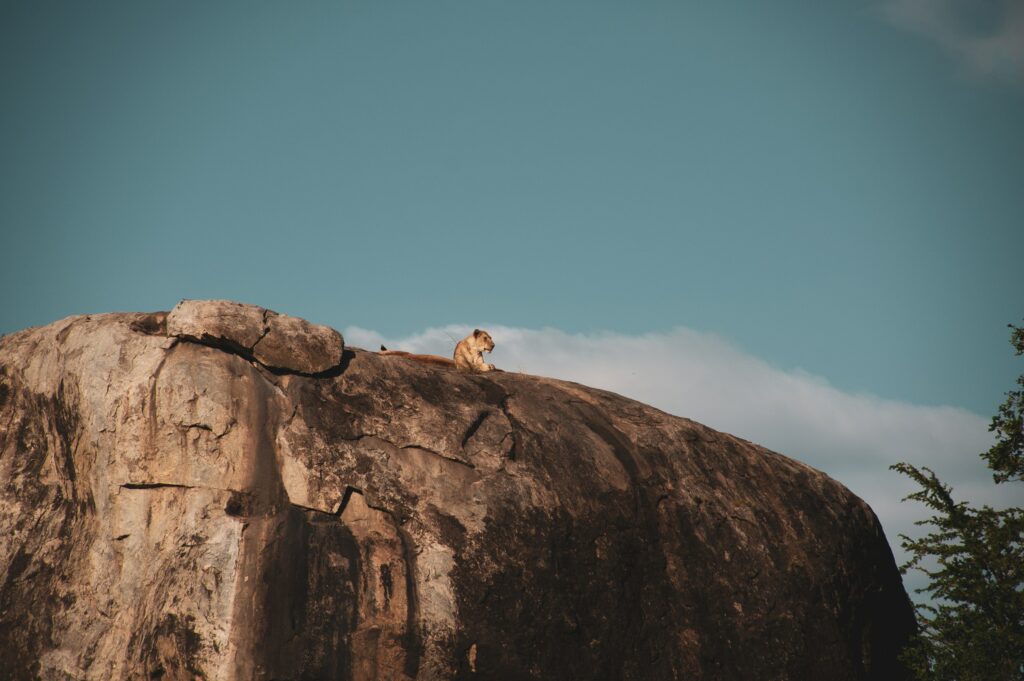 From nuclear scientist to environmental activist and wildlife photographer, Boyd Norton couldn’t resist the spiritual pull from the great plains of the Serengeti – and neither could we. So while we aren’t that great behind the lens or philosophical quotes, we are a team of safari specialists who know almost everything about the Serengeti. We’ve seen the power of tourism in promoting environmental conservation and community upliftment projects which motivates us to continue doing what we do best. So before arranging a bespoke safari itinerary, here’s a brief meander through the history of one of the world’s most significant stages – the Serengeti.

From Free For All to Free For Masai and the Wild 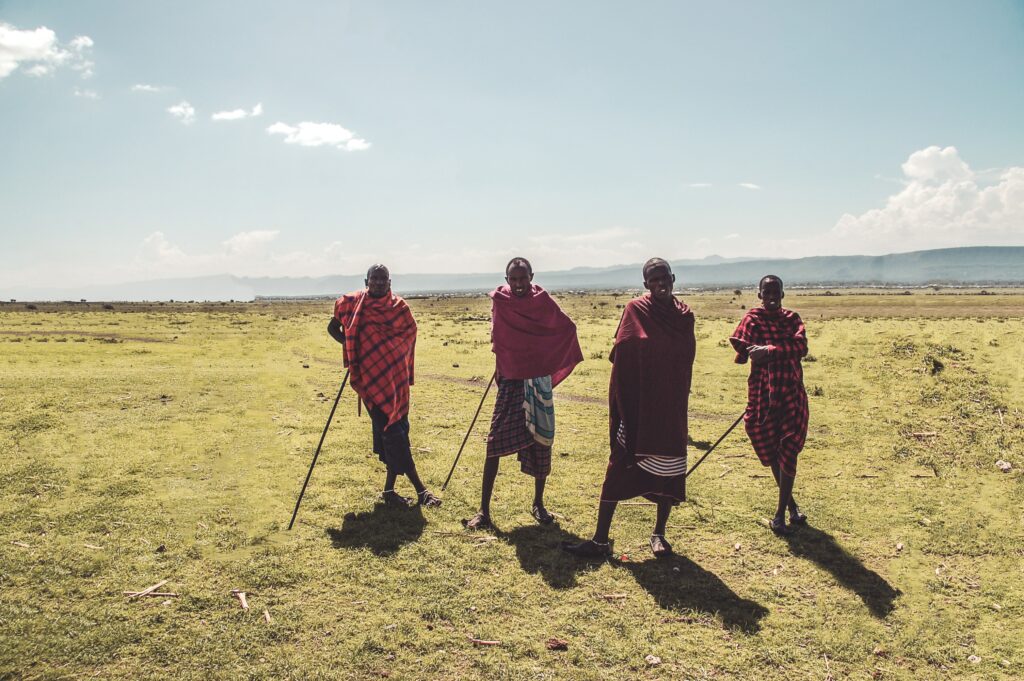 While one should try their best to look back at history through the lens of that time, some parts of the Serengeti’s history certainly make us feel uneasy. For instance, in 1930 it was an area of 2,286 kilometers, established as a ‘game reserve’ that allowed sport hunting activities until 1937. Thankfully, in 1940 it was given ‘Protected Area Status’, and the National Park was gazetted in 1951 – covering the southern Serengeti and Ngorongoro Highlands. It is now one of the world’s largest and greatest wildlife destinations, home to flourishing numbers of big cats, Big Five, over a million wildebeest, more than 500 bird species and an impressive 100 varieties of dung beetle.

Yet before all the bureaucracy and colonial interference, the Serengeti was where the nomadic Masai people grazed their cattle freely within the open plains of the Eastern Mara region, which they named “endless plains.” The Serengeti name has its roots in the Masai language, with ‘siringet’ meaning a great open space where the land stretches on and on. 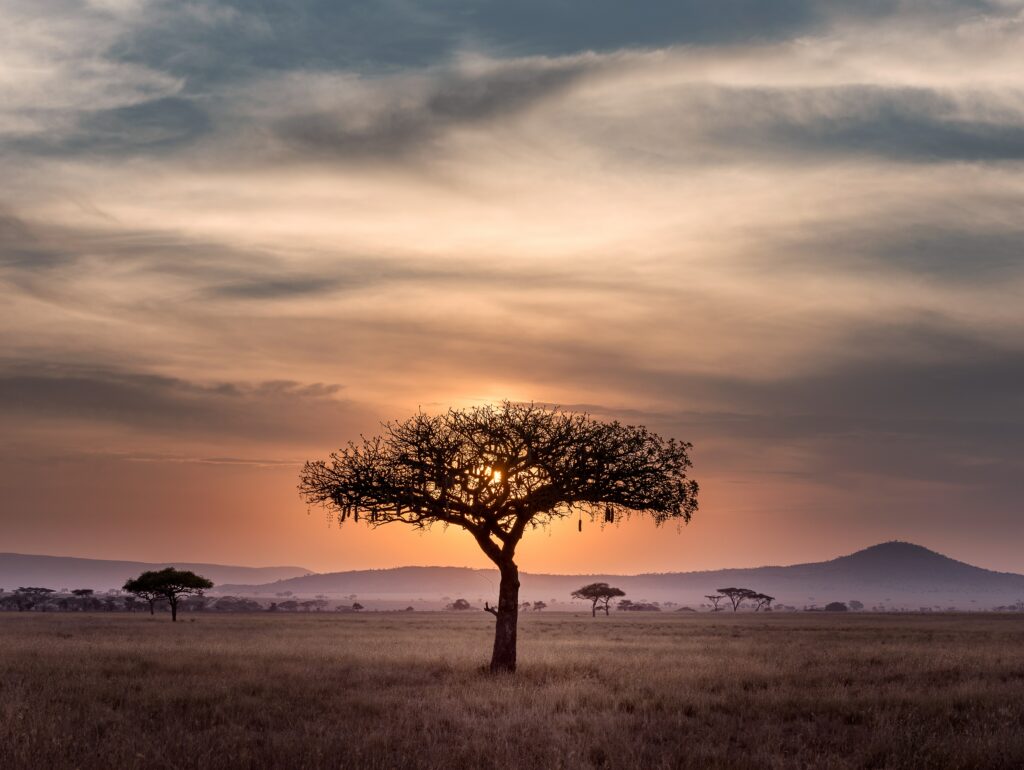 So while the Masai lived alongside the wildlife of this ancient land, our human ancestors (Australopithecus afarensis) also lived in the area for almost four million years. With our roots here in Africa, it’s no wonder then that evidence suggests that Africa is older than Europe and North America – four billion years older. That is why when you arrive at Kilimanjaro Airport, we suggest looking outside your window as you fly over millions of years of weathering, which has flattened mountains and turned much of this great land into rolling endless hills and plains, with a few peaks here and there.

The Great Plains, Kopjes and Rift Valley of Tanzania

The only exception to this ‘flattened’ rule is the geologically active East African Rift System, where two tectonic plates are slowly moving away from each other. This has resulted in cracks forming and created the spectacular Rift Valley and volcanoes on either side, with Kilimanjaro, Mount Kenya, and Mount Meru as prime examples. You may notice that Ngorongoro Crater resembles an extinct volcano, and geological experts and surveys suggest that it has never exploded, yet most of its neighbors have done so.

The Story of Ngorongoro Crater 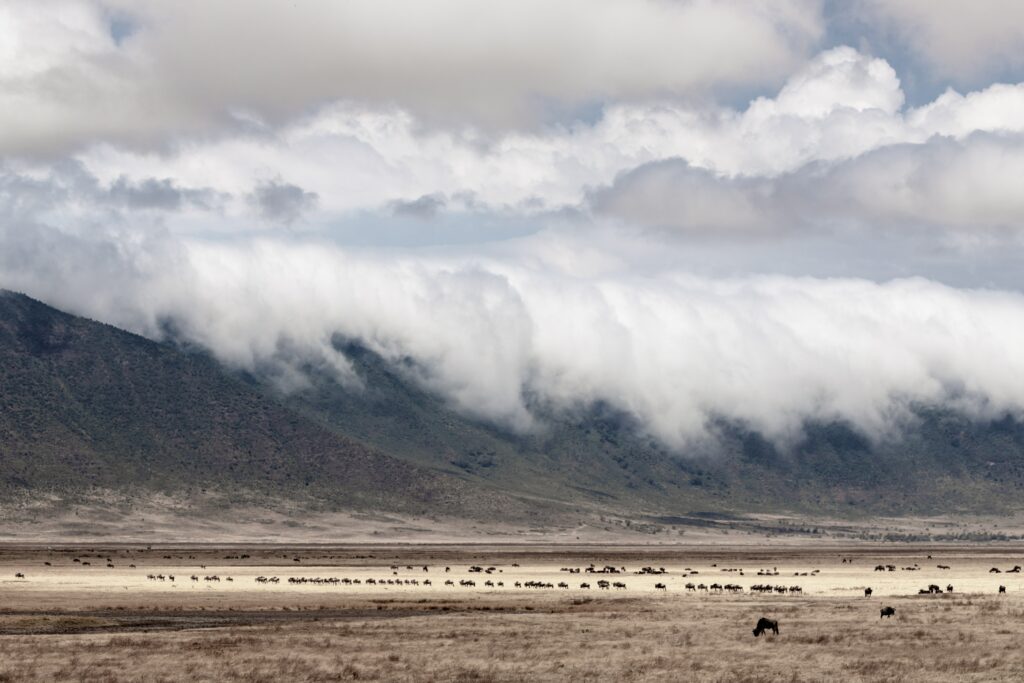 Known as a ‘caldera,’ the Ngorongoro Crater is a place where the mountain has collapsed in on itself as tectonic plates shift and separate, while Ngorongoro isn’t technically inside the Serengeti, it flanks the Eastern edge and is an add-on we would highly recommend when on safari. This is also an area where Masai people still live and graze their cattle, giving travelers a chance to meet these people whose rich culture and traditions are still being practiced today.

The Cycle of the Great Migration 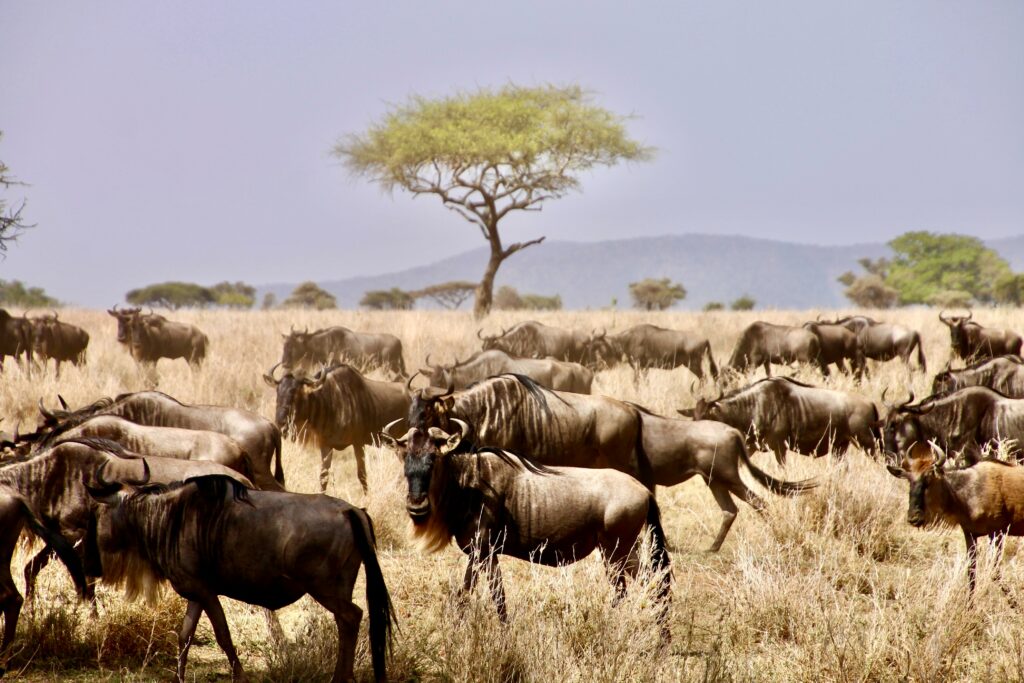 The Serengeti forms one part of the migration route, and in 1961 the Masai Mara National Reserve in Kenya was established, preceding the Lamai Wedge between the Mara River and the border with Kenya, which was added to the Serengeti in 1965. Both these reserves and their protected status gave the migration a permanent corridor, allowing the majestic wildebeests to migrate from the plains of the Serengeti in the south to the Loita Plains and Masai Mara in the north. 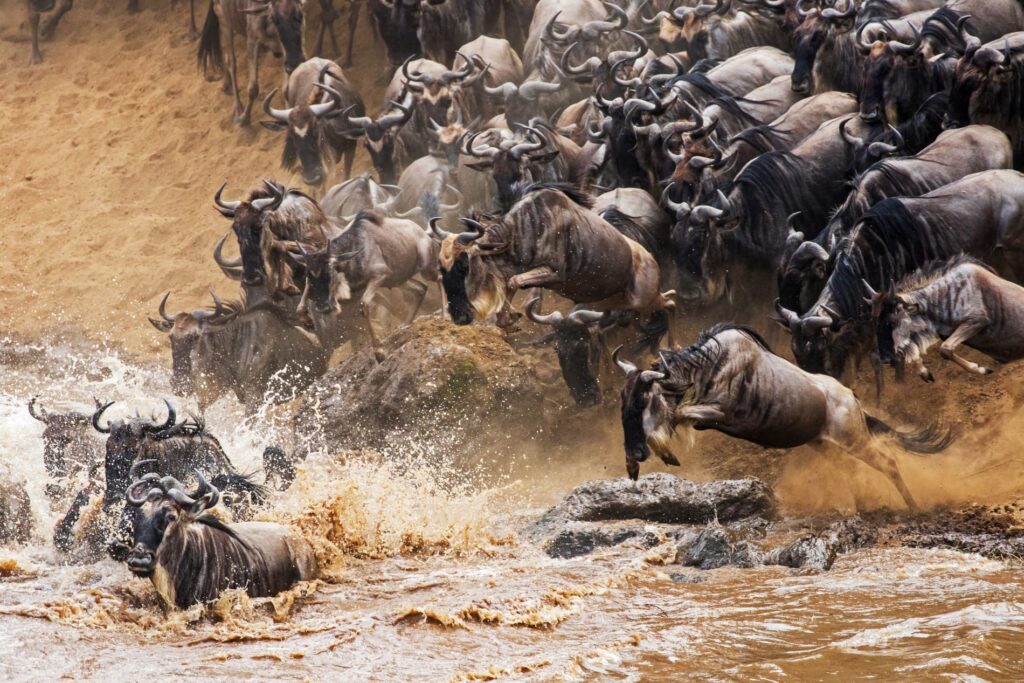 Like all things in the wild, weather patterns dictate the timings and flow of the migration, but generally speaking, from December to April, the southern parts of the Serengeti are where the wildebeest migrate to, for in February, the calving season begins, where more than 500,000 calves are born within three weeks. From April onwards, the herds start to make their way north – usually spending time in the Central and Western areas of the Serengeti, before continuing their journey further north from June onwards. Some may head to the Western Corridor, whilst others will choose the Grumeti River or the Seronera and Loliondo area before moving into Kenya’s Masai Mara. Then from late-October to November, the herds begin their great migration back to the Serengeti, where the cycle starts over again. 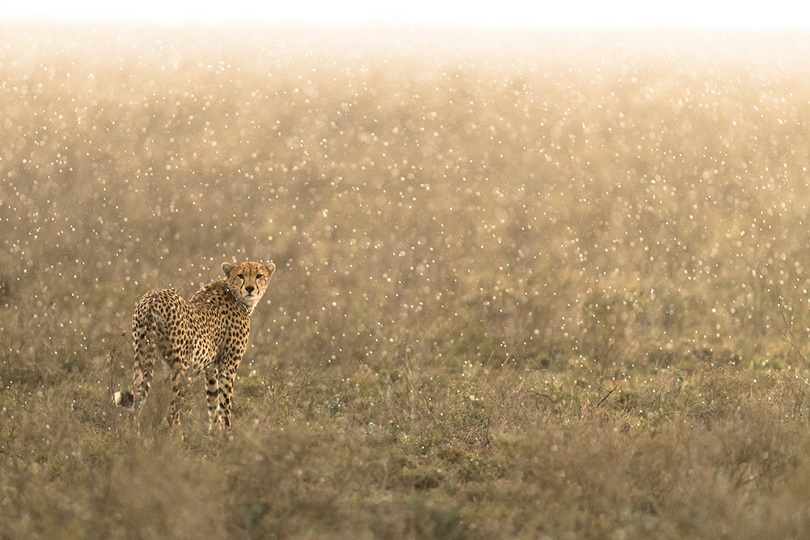 With a show as captivating as the Great Migration and untouched landscape, the Serengeti National Park became one of the first places in the world to gain UNESCO World Heritage Site status in 1981. Grabbing the proper attention of the world, along with the associated protection and special rights, we feel it our duty to do our bit in protecting one of the world’s last true wildernesses.

The Power of Going on Safari With Planet Africa Safaris 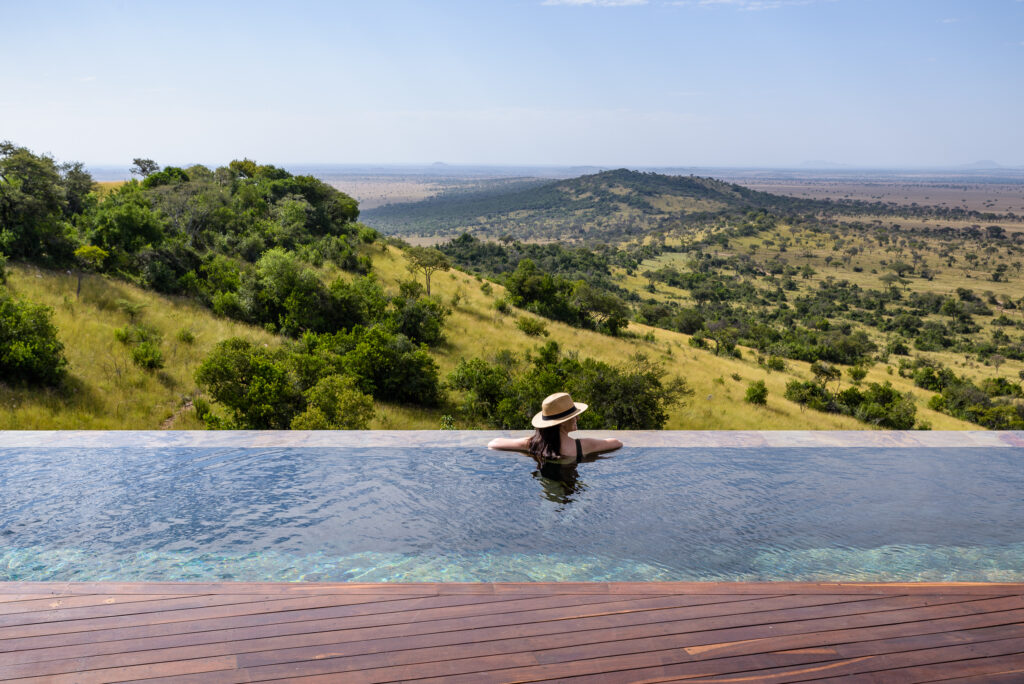 How we do this is simple – and enjoyable. We’re in the industry of memory-making and dream-taking, so reach out to us for more insights, information and travel tips on a safari to Tanzania and the great Serengeti. Get to know our small team of safari specialists and check out what others think about our tailor-made safari itineraries, or cut to the chase and get in touch today.

Taste Africa: A Culinary Journey Through The Continent